Warning: Parameter 2 to wp_hide_post_Public::query_posts_join() expected to be a reference, value given in /home/wildlif0/public_html/wp-includes/class-wp-hook.php on line 288
 Star Wars Inspired Bird Feeders - WildlifeGadgetman.com
Previous Next 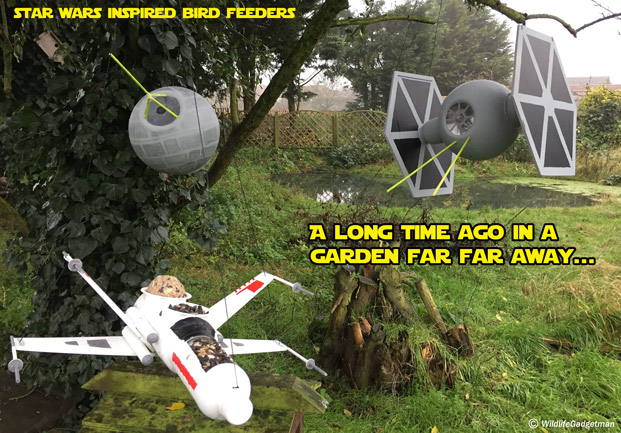 Ok, first things first, this blog post contains no spoilers! If you haven’t had a chance to see what is undoubtedly going to be the biggest movie of all time then don’t worry, I’m not going to spoil any of the surprises that await!

I’ve been meaning to write this blog update for a few days now but decided to wait until I had seen Star Wars – The Force Awakens. Having lived with the hype for the past several months were we going to be disappointed? Was it going to match the originals or or be a massive letdown like the prequels?

Well, I’m not going to go into any detail at all other than to say that Star Wars is definitely back! All the ingredients we know and love are there but with a 21st century makeover.

The original Star Wars movie holds a special place in my heart as it is an integral piece of one of my favourite memories of my later father. I distinctly remember sitting crossed legged on my chair at the cinema next to my dad, clenching on to his arm every time Darth Vader marched on to screen. 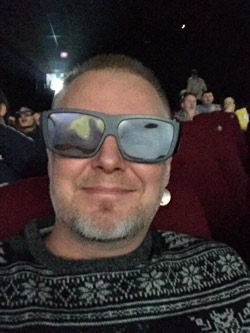 Fast forward nearly 40 years and that little six year old fella has been reawakened! I can’t remember the last time I had been so excited about a movie and I’ve never actively tried to avoid any movie spoilers like I have over the past week!

So, 12.05am yesterday, I’m sitting in front of the IMAX screen at Cineworld in Ipswich, 3D glasses on and the opening credits begin. OMG! The opening crawl text, you know the bit I mean – the yellow text that gives you an introduction to the story as it scrolls into the distance of a galaxy far far away, is in 3D and looks amazing! Could this get any better?! Well, the answer is YES! YES! YES!

There’s so much I could write about how much I loved this film but I won’t, this isn’t a movie review after all, but let’s just say ‘GO SEE THIS MOVIE!‘ you won’t be disappointed.

Well, the short answer is no, these Star Wars inspired feeders I’ve created aren’t a serious attempt at making genuinely useful recycled bird feeders for your garden, they are just a bit of fun. They definitely work and are safe for any feathered diners but to be honest, they will spend more time hanging in my man cave, sorry I mean Gadget Lab, rather than hanging in a tree!

So let’s get straight to it!

I’ve come up with three designs based on three of the most iconic elements of the original Star Wars movie – The Tie Fighter, The X-Wing Fighter and the Death Star. 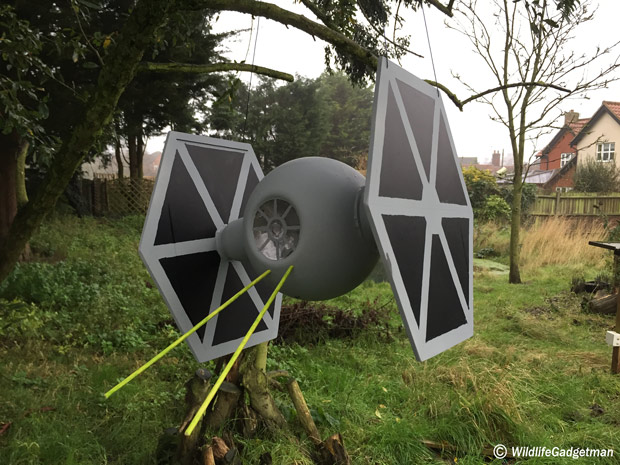 Here’s the Tie Fighter in all it’s imperial glory. As you can see, it’s complete with laser blasts coming out of the front. These were created using wooden BBQ skewers coloured a luminous green using a highligter pen. I then secured them into position using some of the Sugru self setting rubber.

But how did I make the rest of it?… 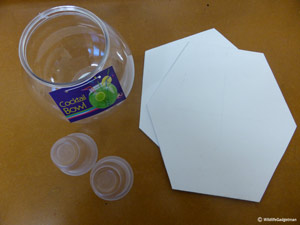 I started by gathering my materials. For the main body I used a plastic cocktail bowl I picked up for £1 in Poundland. The other main items required were some lightweight foamex sheet (the same stuff estate agent signs are made out of) and a couple of yogurt pots. 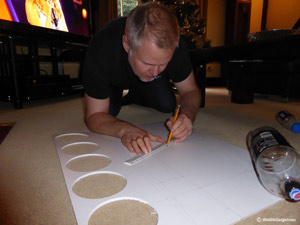 I carefully marked out the shape of the Tie Fighter wings on the plastic sheet and then cut them out using a sharp craft knife. For those of you wondering, no I didn’t do the cutting out directly on the carpet! 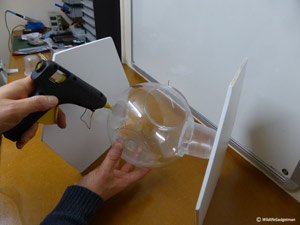 It was then a simple case of putting the pieces together using a hot glue gun. I made sure the large opening of the cocktail bowl would be perpendicular to the ground once finished. I also used some Sugru (self setting rubber) to neaten up some of the joints. 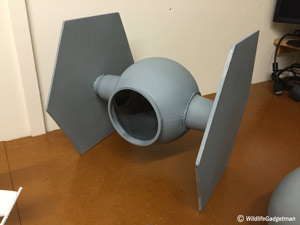 Next job – painting. I started off by spraying the entire outside of the Tie Fighter using some grey primer spray paint. This adhered nicely to all surfaces and gave a great finish ready for final touches. 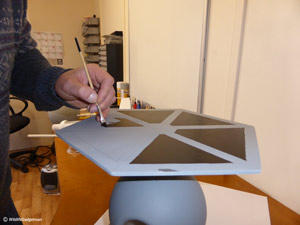 I used black acrylic paint to create the distinctive patterns on the outside and inside of each wing. 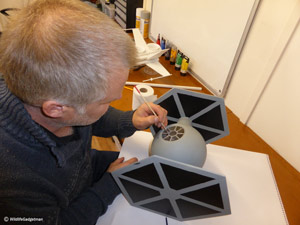 I removed the masking tape from the base of the cocktail bowl and painted in the distinctive shape of the frame for the cockpit window. 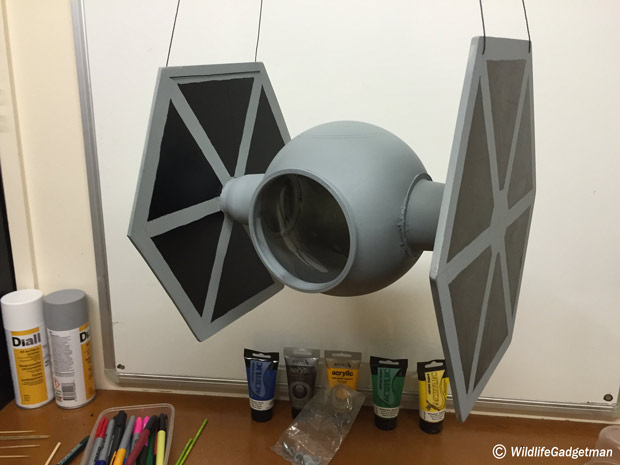 And here is the finished Tie Fighter hanging up to dry. You can see the large opening at the rear and this will be where the birds access the seed. I used some strong cord (it was actually cord from an old crabbing line I had laying around) to create two hanging loops. This will stop the final feeder swinging around too mush in the wind…hopefully. 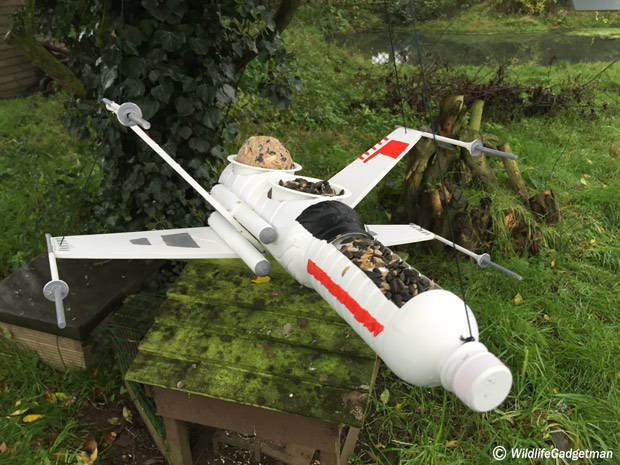 As with most men my age, at some point in our lives we’ve pretended to be Luke Skywalker! Growing up I’ve made my own X-Wing fighters out of cardboard boxes, washing airers and bed sheets, branches and old bits of wood, the list goes on. For me, the X-Wing was the best vehicle in Star Wars, even better than the Millennium Falcon.

You can see from the image above that I’ve cut various holes in the body to hold the seed. Notice the R2D2 shaped fat ball in the rear?! 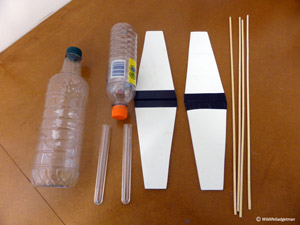 As always I started with gathering the materials. It’s all recycled items again including a couple of plastic bottles, some off cuts of the foamex sheet I used for the Tie Fighter, some wooden BBQ skewers and four plastic tubes I had laying around. 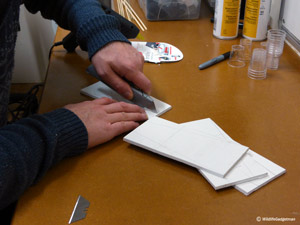 I carefully marked out the outline of the four wings and cut them out using a sharp craft knife. 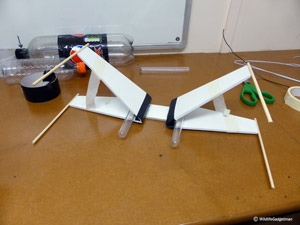 I then taped each pair of wings together using some gaffa tape and glued the plastic tubes into position using the hot glue gun to form the correct angle. I then glued a BBQ skewer to the end of each wing to form the laser canons. 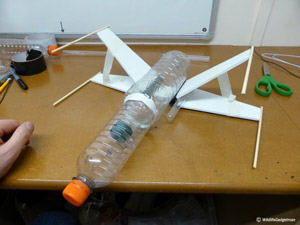 Next, I added the main body. I cut the base off of the smaller bottle and then attached it to the larger bottle using a combination of the hot glue gun and Sugru. 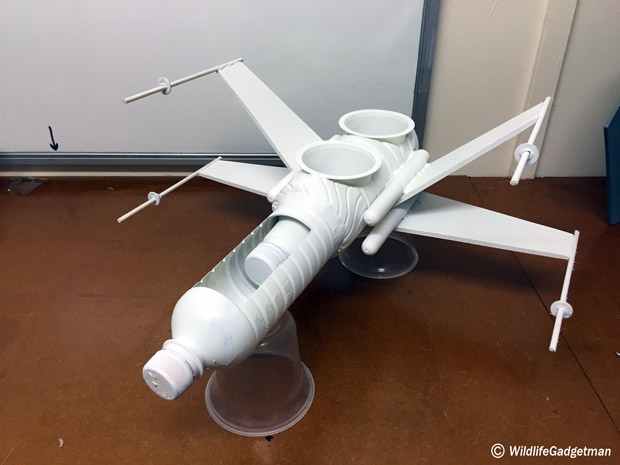 After cutting openings in the body for the bird seed I added a few other finishing touches using a few metal washer and a little more Sugru self setting rubber. Once the glue had set and the Sugru had hardened I gave the X-Wing a generous coating of white primer spray paint and left it to dry. 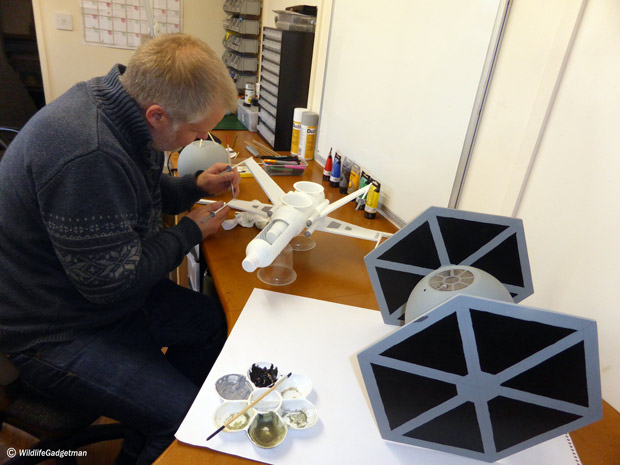 The final stage involved adding some extra details with various colours of acrylic paint. Not a bad result from a pile of junk! 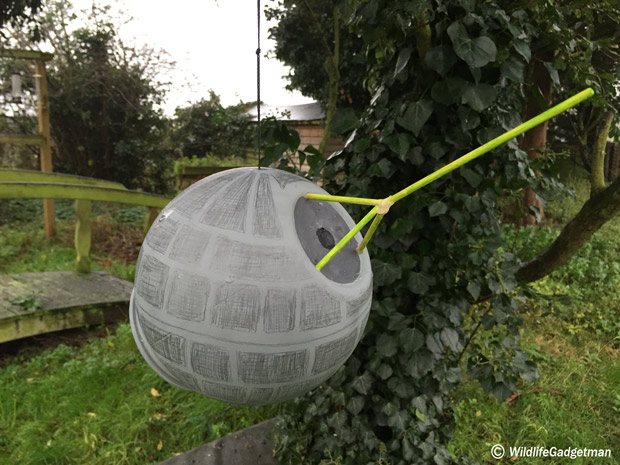 This brings us to the final creation in my own Star Wars trilogy, the Death Star!

This was by far the simplest of the three bird feeders to create as it is essentially just another one of the plastic cocktail bowls I picked up from Poundland for £1.

I sprayed it with more of the grey primer and left it to dry overnight. The flat base made the ideal shape for the deadly planet destroying laser canon so I picked out a little extra detail using black acrylic paint. I then used wooden BBQ skewers to form the shape of the laser beam in action. This part is held together using a combination of the hot glue gun and more Sugru. I added the distinctive green colour of the laser beams using a highlighter pen. The rest of the shading detail around the body was done using a pencil.

The most important part of this build was making sure the hanging hole was drilled in the right position. I needed to take into consideration keeping the large opening at the right angle to prevent the bird seed just falling out as well as getting the laser beam pointing up slightly so it wasn’t just horizontal to the ground.

I think it turned out pretty well! 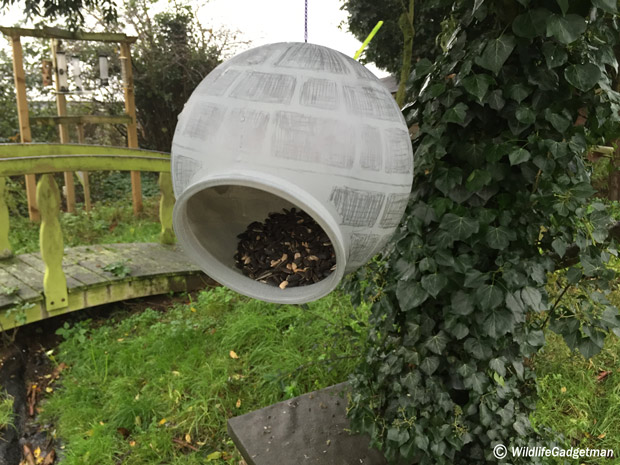 And here is the rear of the Death Star. You can see the seed inside waiting for visitors.

Did You Know There Is A 3rd Side To The Force?

And there you have it, my own Star Wars Trilogy!

As I mentioned at the beginning of this post, these bird feeders are just meant as a bit of fun. If you’ve got hungry squirrels around they’ll be destroyed in minutes…probably. If it starts pouring with rain then the food in the X-Wing is going to get wet.

To be honest, feeding the birds on this occasion is just an added bonus. The main reason for trying this project, particularly now, is that it’s a great way to capitalise on kids excitement around the new Star Wars film and hopefully mix that with some fantastic #Wildtime.

With any luck kids will remember the wild time spent creating their own version of these feeders and associate the same feeling of excitement with it as they have for the new film.

Have a go with your kids and awaken the ‘wild side’ of the force in them. You never know, you may reawaken it in you too!

May the force be with you!