Warning: Parameter 2 to wp_hide_post_Public::query_posts_join() expected to be a reference, value given in /home/wildlif0/public_html/wp-includes/class-wp-hook.php on line 288
 Woodpigeon Nest Predated - WildlifeGadgetman.com
Previous Next

We’ve had fun watching the Woodpigeon nest on the live cam over the past 3-4 weeks but everything came to rather an abrupt end in the early hours of Sunday morning. 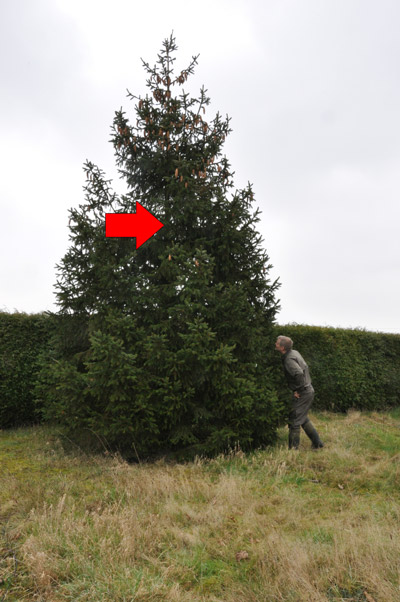 [/custom_frame_left] We have a tree in the garden that has one particular spot in it that is almost constantly used for nesting either by Woodpigeons or Collared Doves and this year was no exception. However, this must be one of the most predated spots I have ever witnessed as out of the six or so nesting attempts I’ve viewed only one has been successful.

I wondered whether the tiny camera I’ve placed overlooking the nest was attracting the attention of potential predators but its small, camouflaged and very unobtrusive so I’m sure that’s not the problem. Besides, I’ve used the same set up hundreds of times before in numerous locations and its never caused an issue. So, why does this spot act like a magnet to cats, crows and magpies (the trio of predatory culprits)?

Basically, I think the biggest factor is cats, crows and magpies are pretty intelligent and Woodpigeons and Collared Doves aren’t! The tree is fairly isolated with no other cover around and the Woodpigeons and Collared Doves make such a kerfuffle when they land and take off near the nest they may as well hang a giant banner from the tree saying ‘WE ARE NESTING HERE’! 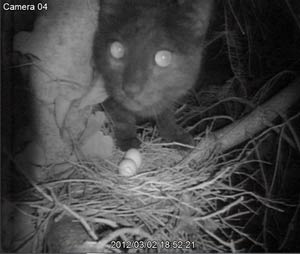 It’s very difficult to protect the nest site from other birds but a little easier to prevent access from the ground, or so I thought!

Back in 2012 I recorded a very close shave between a pair of Collared Doves and the local feral cat that seems to live on the adjacent allotments at the end of the garden.

The following morning I decided to attempt to create a wire mesh barrier around the tree below the nest to prevent the cat from getting close a second time. The branches of the tree extend down to ground level and are pretty dense. This made it particularly difficult to get the wire mesh into the heart of the tree so I could securely fix it around the trunk and extend it out to the outer edges of the branches. 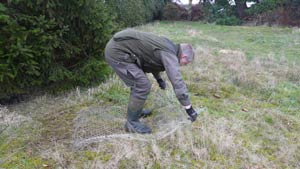 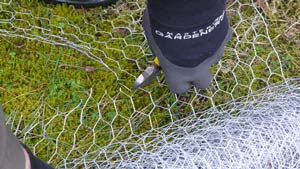 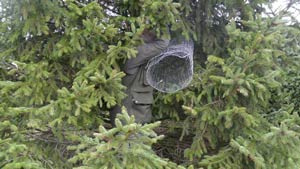 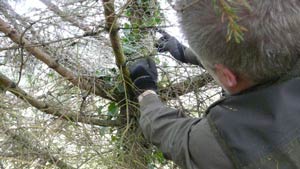 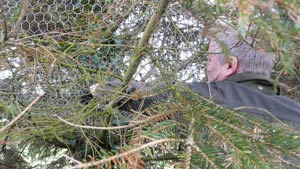 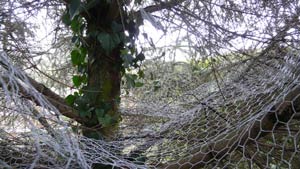 But after an hour or so, 12m of wire mesh, 26 cable ties and a lot of sweat and scratches I had finished!

I can remember thinking at the time ‘If the cat can get through that lot it must have gone to ninja training school and I’ll have to nickname him ‘Houdini’!

I hadn’t seen any sign of the cat near the nest site since…..until yesterday.

This is what I recorded via I-Catcher Console software….

The video starts with a typical changeover of duties between the male and female Woodpigeon and then cuts to the drama that unfolded in the early hours of Sunday morning.

Watch the video and you’ll see just how unlucky one of the Woodpigeons actually was.