Warning: Parameter 2 to wp_hide_post_Public::query_posts_join() expected to be a reference, value given in /home/wildlif0/public_html/wp-includes/class-wp-hook.php on line 288
 Sad Ending For The Blue Tit Nest - WildlifeGadgetman.com
Previous Next

Unfortunately we’ve had a sad ending to the Blue Tit nest we have been following on the live cams this year.

Everything was going fine until last Sunday. Incubation went without a hitch. Seven chicks hatched on 13-14 May and both mum and dad were doing a fantastic job making sure all the chicks were fed and any fecal sacs were promptly removed from the nest box.

On Sunday 19th May the female Blue Tit disappeared. Using I-Catcher Console (camera monitoring software) I can see everything was fine at 8.26am. Mum was sitting in the nest making sure the chicks kept warm and dad paid a visit with a beak full of grubs. The male doesn’t hang around too long and shortly after he left the nest box he was closely followed by the female. She never returned.

This is the last photo of the family altogether. 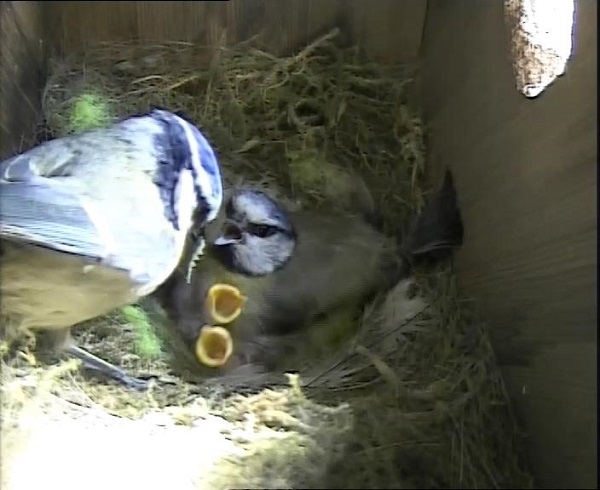 The male continued to return to the nest with food throughout Sunday but was obviously confused to see the female was missing each time. He often hung around at the entrance calling to his mate but his calls were unfortunately unanswered. By 7.30pm it was obvious that something tragic must have happened to the female Blue Tit. Whether she was predated by a Sparrowhawk or cat, or hit by a vehicle we’ll never know.

By this time in the evening the temperature had started to drop. The chicks weren’t moving much at all so it was inevitable that they wouldn’t make it through the night.

Sure enough, when I checked the camera on I-Catcher in the morning there was no movement at all inside the nest box. The male continued to visit the box with food at least another five or six times during Monday but eventually gave up and hasn’t returned since.

Using cameras to monitor wildlife in this way really highlights the frequency at which nests fail and it makes you realise just how finely balanced the ecosystem is. It’s sad to watch something like this happen especially in a nest you’ve been following from the beginning but its important to remember that this is a perfectly natural occurrence and happens very often in the wild.

Let’s keep our fingers crossed that any Blue Tits nesting in the garden next year have better luck.