Warning: Parameter 2 to wp_hide_post_Public::query_posts_join() expected to be a reference, value given in /home/wildlif0/public_html/wp-includes/class-wp-hook.php on line 288
 Review - Gardenature Digital Wireless Conversion Kit - WildlifeGadgetman.com
Previous Next 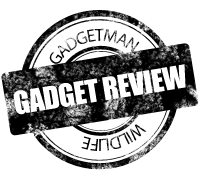 ‘Wireless’ wildlife camera systems have been available for many years. Up until recently they have primarily used ‘analogue’ technology to wirelessly transmit video and audio signals from a camera to a receiver box plugged into a TV or computer. Over the years I’ve lost count of how many man hours I’ve spent researching and testing analog wireless cameras. The vast majority I’ve tried have been extremely disappointing. I did however find a kit that was far superior to anything else I’d found and therefore incorporated it into my wireless camera system design. This system has proved hugely popular and up until quite recently has been one of the best selling systems at Gardenature.

However, we live in a digital world. Our homes are increasingly crammed with digital devices and the air around us is becoming increasingly swamped with digital signals. These digital signals can overpower the analog devices leading to increased levels of interference on the analog devices. Gardenature recognised this issue early on and have now upgraded all of their wireless systems to include the very latest state of the art ‘Digital Wireless’ transmitters and receivers. Find out how I got on putting their new ‘Digital Wireless Conversion Kit’ through its paces.

Both ‘wired’ and ‘wireless’ systems have their advantages and disadvantages. These advantages and disadvantages will vary depending on the the type of system and the location in which it’s used. There are a few ‘golden rules’ to follow when setting up a wireless system to ensure it gives you the best performance. I’ll include a few of these ‘golden rules’ throughout the review below. For a full guide to setting up a ‘Wireless’ wildlife camera system please check out my ‘How To Guides’.

Why is it called a ‘Digital Wireless Conversion Kit’? 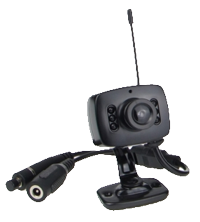 Some analog wireless wildlife cameras have a transmitter built into the housing of the camera itself. These type of cameras tend to have low power transmitters and are very prone to interference from the slightest electrical source. They also have a number of disadvantages for wildlife watching applications…

The Gardenature ‘Digital Wireless Conversion Kit’ converts a standard ‘wired’ camera into a ‘wireless’ camera. It has a separate transmitter that plugs into your wired camera which then provides a ‘Wireless Link’ back to the receiver. The conversion kit has a number of distinct advantages over the traditional wireless cameras which I will try to cover within the review below.

How ‘wireless’ is wireless?

I think it’s important to clarify at this early stage exactly what ‘wireless’ means in the context of the ‘Digital Wireless Conversion Kit’. Think about wireless devices you have in your home right now. Wifi computer networks, mobile phones, cordless telephones. What’s one of the main things they have in common? They all require power. Some will need to be connected to the mains for periods of time to charge their battery and others such as your computer wifi router will need to be permanently connected to the mains. The same applies to the Gardenature ‘Digital Wireless Conversion Kit’. The kit is supplied with a 5m power cable which can be used to connect to the mains via one of the supplied 12v mains adapters or it can be connected to a 12v battery source. There is also a 10m AV/power cable attached to the transmitter. This is used to attach the transmitter to your camera. Therefore, your camera can be up to 15m away from the nearest power source. This has huge benefits when planning your camera system.

So, in the context of the ‘Digital Wireless Conversion Kit’ the word ‘Wireless’ means nothing more than it provides a ‘Wireless Link’ somewhere between the camera and the viewing screen. You will still require a power source within 15m of your camera. This could be a mains socket in a garage or shed or a suitable 12v battery pack. 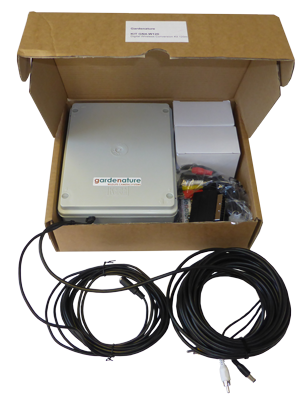 The ‘Digital Wireless Conversion Kit’ comes neatly packaged in a plain brown carton and is ‘ready assembled’ making it a doddle to set up. 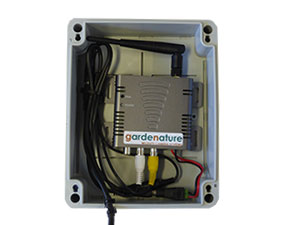 Here’s a photo of what’s inside the weatherproof enclosure. You’ll need to remove the cover to fix the enclosure to a wall or fence but you shouldn’t need to touch any of the connectors or the transmitter. 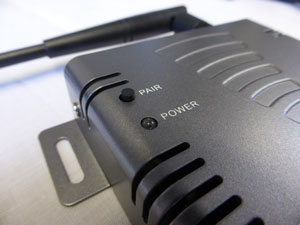 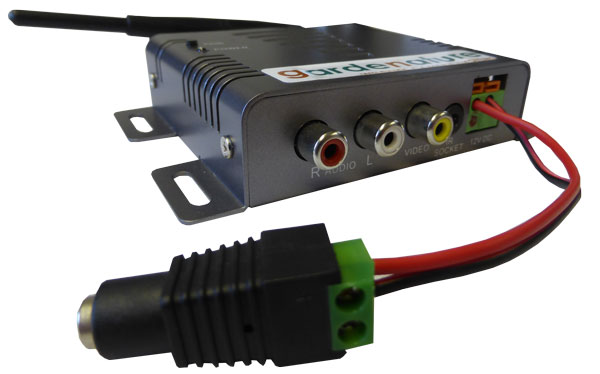 The metal construction of the receiver oozes quality. All connections are clearly labelled making it very simple to attach the receiver to your TV, DVR or other capture device. The attached antenna can be adjusted to help pick up the signal from the transmitter.

These transmitters work over the 2.4Ghz band and are paired to the receiver to provide security and signal quality. The pairing selects a random ID code from an extensive ID range and is shared only by the transmitter and receiver pair. Therefore the wireless video signal cannot be received by any receiver other than its own. It should therefore only be necessary to rerun the pairing procedure if either the transmitter or receiver has been replaced. 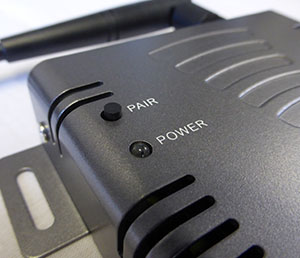 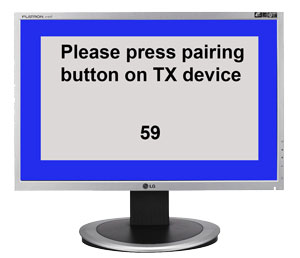 2. A countdown on the monitor then gives you one minute to press the pairing button on the TRANSMITTER. Hold the button down again until the LED starts flashing. 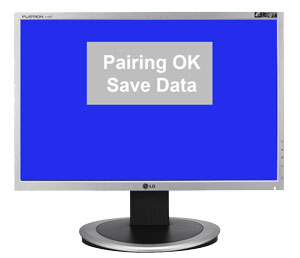 3. When pairing is complete the monitor will display ‘PAIRING OK/SAVE DATA’. 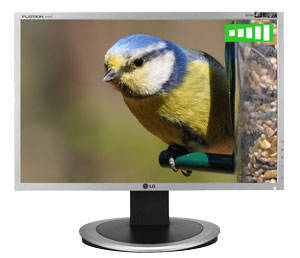 4. When the transmitter and receiver are successfully paired the monitor will display the camera picture and in the top right hand corner of the display screen a signal strength bar will show up to 5 bars.

Unlike analogue transmitters, the supplied digital transmitter has no dipswitches for selecting transmission bands in the 2.4Ghz range. It uses an automatic channel hopping feature to select a clear usable channel and this channel may change frequently dependent on the traffic detected on the channel band. Therefore spurious use by other equipment e.g. WiFi, will trigger the unit to search for another available channel seamlessly. The channel hopping facility also allows a number of paired transmitters and receivers to be installed in the same location.  The total number of channels that can operate at one site  is a maximum of 20.

That all sounds great on paper but how does it perform in the real world?

The Gardenature ‘Digital Wireless Conversion Kit’ is without doubt the best performing wireless system of its kind that I’ve tried.

Over the years I’ve tested numerous wireless transmitters in and around my garden so have a pretty good idea of what areas usually offer a strong signal and what areas are ‘blind spots’. The Gardenature ‘Digital Wireless Conversion Kit’ is without doubt the best performing wireless system of its kind that I’ve tried. The best analogue system I’ve tried reliably transmitted a signal up to 30m assuming there were minimal obstacles between the transmitter and receiver. There were two or three spots in the garden (in the trees at the far end, behind the fence and behind the poly tunnel) that I’ve never been able to get a reliable interference free signal. However, with the Gardenature Digital Wireless Conversion Kit I was able to place a camera in any location within the garden (up to 40m between the transmitter and receiver) and receive a rock solid video signal. I was blown away by the performance!

That’s all great but I really wanted to push the kit to its limit. What’s the maximum range the Digital Wireless kit could reliably transmit over? I was lucky enough, with the help of Simon from Gardenature, to test the wireless kit at a local owl sanctuary. I was surveying the site for the potential of adding a couple of cameras to a red squirrel enclosure. The squirrel enclosure is at one end of the site and the plan was to place a TV in the education centre at the opposite end of the site. In between was the flying display field, numerous enclosures and a number of trees.

[pullquote style=”right” quote=”dark”]I consistently achieved reliable transmission distances of 120m![/pullquote] I connected the transmitter and a camera to a 12v battery pack at the squirrel enclosure and another battery pack to the receiver and a mini display. Holding the receiver and display I started to walk along the path, between the enclosures and trees, back towards the education centre. I consistently achieved reliable transmission distances of 120m! The great thing about the wireless system is that there is no interference or gradual breakdown of signal. It either works perfectly or not at all. I’m sure if the line of sight was totally clear the kit could have transmitted over 130m+!

Is this kit easy to set up and use? Sure is!

Does it offer great video signal quality over a long range? It sure does!

Would you recommend the ‘Gardenature Digital Wireless Conversion Kit’? I sure would!